SierraSpace is a new reception space for the Sierra Club headquarters in San Francisco. The Sierra Club is the oldest and largest environmental nonprofit in the world. But the headquarters for this venerable group had no identity, or even a negative identity. Our intention was to create a strong, clear, vibrant first impression. Our proposal interprets two primary images in the Club's history: the Sierra Nevada Mountains, namesake of the Club, and John Muir, its founder. The micro-ecologies of fallen logs, lumberyards, stacks of milled timbers, and similar images from the history of the Sierras also informed the project.

The existing space was depressingly dark, full of old unused conduit, peeling paint, and a collection of greying Postmodern furniture that had never been removed. But the most interesting element of the lobby was what we called the 'plant orphanage': a series of unmatched plastic pots containing old or dying plants brought in by staff who no longer wanted to care for them.

Our objective was therefore threefold: to give an identity to the Club's historic environmental mission while removing clutter; to brighten the space; and not to lose the unique qualities of the plant orphanage and other elements. Our initial proposal was based around an abstracted topographical canopy, made of milled lumber—the topography of the Yosemite Valley and surroundings, but flipped upside down. Within this height-field we were able to conceal lighting, HVAC, and other services, essentially masking the tangle of wires and conduit on the existing ceiling. (This element has been postponed as a 2nd phase of the project.) The lobby desk is milled from reclaimed Douglas Fir timbers from a demolished school building. We routed the timbers of the desk and embedded epiphytes and other plants in it to help purify the air and brighten the space. The wall behind the reclaimed Douglas Fir lobby desk was originally proposed as a routed LED pixel-image of John Muir's face, but after the budget came in we reimagined this as a vinyl supergraphic of the Yosemite Valley. 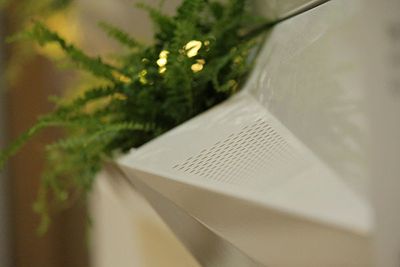 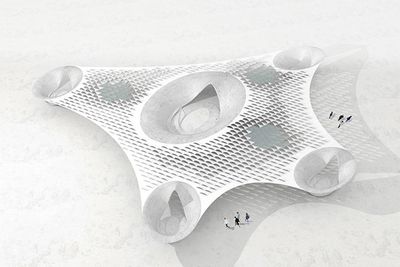 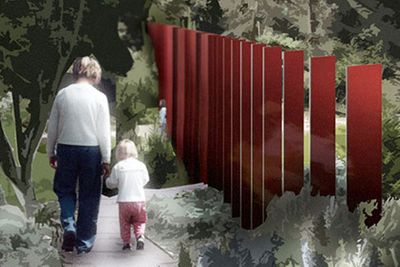